#TruthWins is trending. On Wednesday, Johnny Depp won his defamation case against his ex-wife, Amber Heard, as the whole world closely watched jurors announce their verdict. A crowd of Depp supporters gathered outside of the courthouse and went up in cheers, chanting: “Johnny, Johnny.” While the seven-member civil jury in Virginia found both Heard and Depp defamed each other, she was guilty of slandering him on more accounts.

Jurors decided the 58-year-old actor is entitled to $10 million in compensatory damages and $5 million in punitive damages after finding that Heard libeled him when she wrote an op-ed in the Washington Post in 2018, implying being a victim of domestic abuse. But the judge explained state law limits punitive damages to $350,000, meaning the actual amount he was awarded is $10.35 million. The jurors also ordered Depp to pay $2 million for his former wife’s partial success in her countersuit about being defamed by one of Depp’s attorneys who called her abuse allegations a hoax.

After a six-week widely watched trial, the jury ruled in Johnny Depp’s favor in his defamation lawsuit against ex-wife Amber Heard 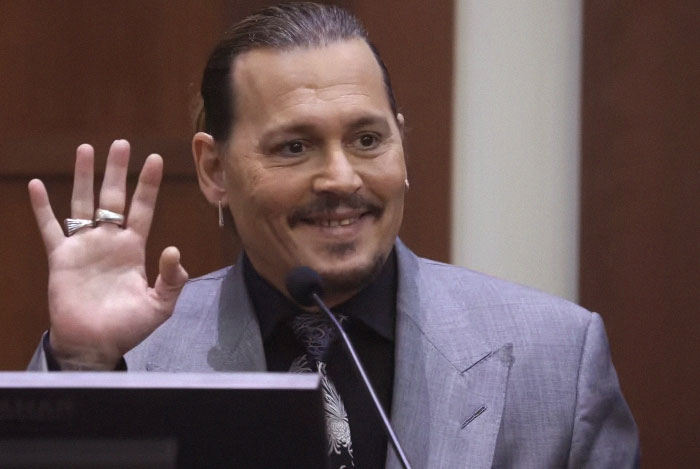 Depp found the verdict to be a relief, as he shared a statement on Instagram saying, “The jury gave me my life back” 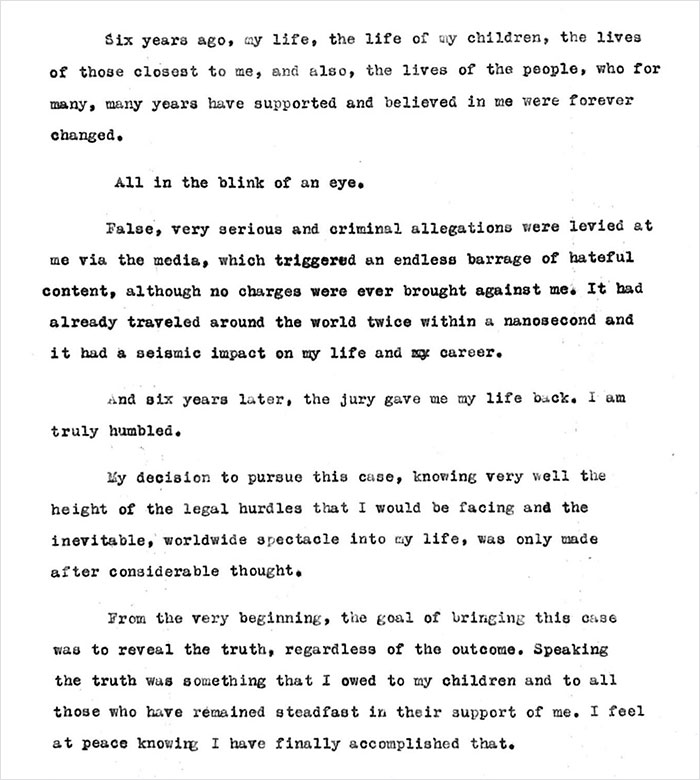 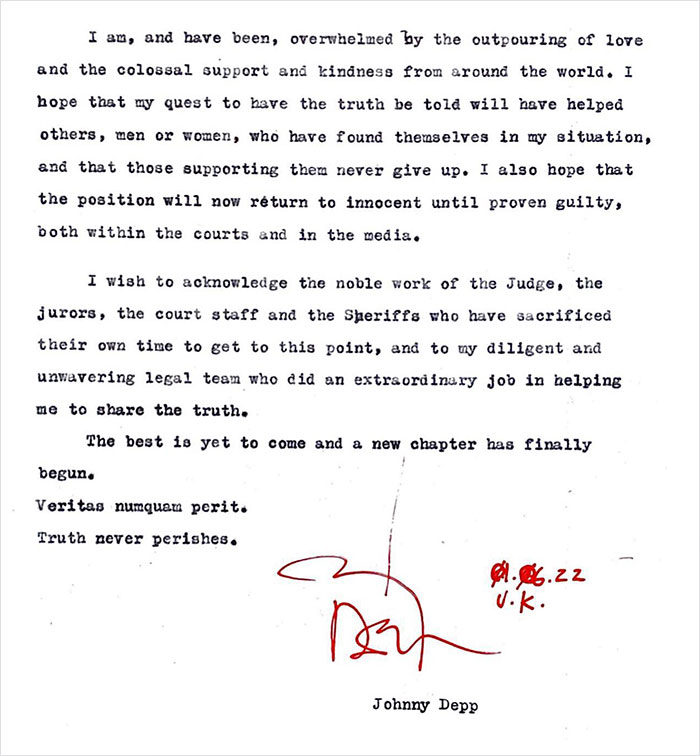 Heard released a statement as well, explaining that the disappointment she was feeling “is beyond words” and calling the verdict a “setback” for women 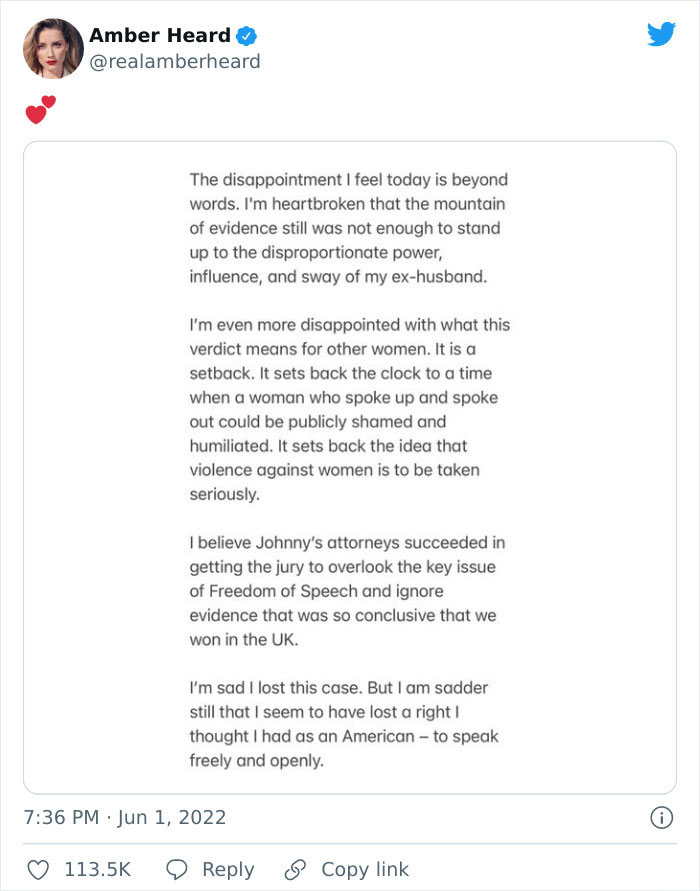 You can hear the jury’s verdict in full right here

The internet is buzzing with reactions to Depp’s victory, here’s what people had to say

While Depp wasn’t present in the courtroom on Wednesday due to a previously scheduled work commitment, Heard was. As the judge read the verdict saying that she had lost the majority of her countersuit, she remained stone-faced, eyes focused on the ground. Following the jury’s decision, Heard took to Twitter to say that her disappointment “is beyond words” and express her sadness about losing “a right I thought I had as an American — to speak freely and openly”.

Shortly after winning the defamation lawsuit, Depp also stated on Instagram that his main goal was to clear his name. He was relieved to hear the decision and thanked the jury for giving him his life back, adding that he was “truly humbled”. Within just a few hours, over 10 million people liked his post on the platform. His lawyers also gave a brief statement outside the court right after the verdict. They said Heard’s claims were “defamatory and not supported by any evidence” and they were “so grateful to the jury for their careful deliberations”. They added they were “truly honored” to work with the actor on the case, saying it was “now time to turn the page and look to the future”.#5

If you haven’t been able to keep up with the case, Depp sued Heard for $50 million, saying she defamed him by accusing him of domestic abuse. Heard also filed a countersuit against Depp, seeking $100 million in damages and blaming his legal team for falsely implying she was faking her claims.

But let’s take a few steps back, shall we? The actors met on the set of The Rum Diary in 2009 and were married in Los Angeles in 2015. Unfortunately, they called it quits just 15 months after. Heard filed for divorce and obtained a temporary restraining order against her spouse amid allegations that he had assaulted her under the influence. “​​Given the brevity of this marriage and the most recent and tragic loss of his mother, Johnny will not respond to any of the salacious false stories, gossip, misinformation and lies about his personal life,” a rep for the actor told PEOPLE at the time. “Hopefully the dissolution of this short marriage will be resolved quickly.” Unfortunately, that didn’t seem to be the case.#8

It was always about truth – not retribution or punitive damages. I don’t imagine Ms Heard will pay up, and I am even more certain that Mr Depp wont care. His reputation has been resurrected. Frankly, that he was ever a star in the Disney stable is amazing to me. He has always seemed a beautifully, deliciously wild spirit to me, and not particularly family-friendly, but oh so entertaining. I hope his career can get back on track and we look forward to many more years of his wonderful, insightful and delightfully quirky work.

In 2016, the duo reached a $7 million settlement with Heard pledging to donate the money to charity. The former couple released a joint statement saying their relationship was “intensely passionate and at times volatile, but always bound by love. Neither party has made false accusations for financial gain. There was never any intent of physical or emotional harm.”

Two years later, Depp sued UK tabloid The Sun over an article calling him a “wife beater”. In that case, Judge Justice Nicol explained that the paper had proved the article to be “substantially true”. Depp ultimately lost the lawsuit since the judge found that 12 of the 14 alleged incidents of domestic violence testified by Heard had occurred. Depp’s lawyer called the ruling “perverse” and said the actor plans to appeal.#11

When it comes to Heard’s 2018 publication in The Washington Post where she recounted enduring physical, psychological, verbal, and sexual domestic abuse, Depp was not specifically named in the piece. However, he argued it was an example of “defamation by implication” because some parts referred to allegations of abuse she made against him following their break-up in 2016. Moreover, Depp stated his professional reputation was damaged nonetheless because he lost a few big-budget film roles.#14

In 1964, the Supreme Court ruled that defamation suits brought by notable figures must prove the claims were false and caused damage and confirm that the person who made the defamatory statement did so with “actual malice.” To show that Heard acted with malicious intent, the actor had to provide evidence he never assaulted his ex-wife, which in turn would prove that her op-ed piece aimed to defame him. Also, to claim damages, he had to explain how her article caused harm to his reputation. Being a three-time best actor Oscar nominee, Depp had been a profitable star until recent years. His role as Jack Sparrow helped turn the Pirates of the Caribbean into a global franchise, but he lost that role. He was also replaced in the ongoing Fantastic Beasts series with Mads Mikkelsen in the latest film, The Secrets of Dumbledore.#20

I hope this victory thrusts forward the positive impact, immediately and with a resounding boom towards his career and radiates like soundwaves into the universe! He deserves a good karma explōsion.0Reply

The case glued masses of people to their screens because of its captivating television coverage. Millions of passionate followers were dissecting everything from the actors’ behaviors and words to the potential meanings of their clothes. While both performers emerge from the trial feeling damage to both their reputations and their careers, Depp can finally relax knowing the jury ruled in his favor and appreciate the overflowing support shared by his fans online.#24

Popular on Law of Universe